We’re 7 days into the 2018 legislative session and we simply must hear from you.

As this is the “short” year for the legislature, session is moving fast, so our window of time to protect our gun rights is very narrow.

Minnesota Gun Rights is FIGHTING BACK!

At the same time, gun owners deserve the protections of a Stand-Your-Ground law instead of being forced to retreat in the face of a violent criminal like we saw in Florida.

There’s so much going on with these battles, my head is spinning.

That’s why I need to make sure that you’ve answered your 2018 Member Ballot — so YOU can tell us where you want us to focus our efforts this session.

But that’s not all.

Once you’ve cast your vote, please make a generous contribution to help fund the program(s) that you indicated in your member ballot.

Last session — with our major fight to move Stand-Your-Ground law in the House — was expensive. And we’re not nearly as well prepared for this session as we need to be.

So whatever you can do to help us fund our programs for 2018 would be very helpful!

Thank you, in advance, for your vote and your support!

The first week of the legislative session is over and the gun-grabbers are on FULL ASSAULT!

I’m afraid the recent shooting in Parkland, Florida has turned gun politics in St. Paul into a whirlwind.

With even Republicans like Marco Rubio joining with Chuck Schumer, Dianne Fienstein and our national media, anti-gun politicians here in Minnesota are seizing this opportunity to RAM gun control into law.

Site, even before this attack that gun-grabbers are attempting to turn into an excuse for gun control, I was worried about the upcoming session of the Minnesota State Legislature.

Now, I’m afraid all bets are off.

Without your action, I’m afraid you and I will be staring straight at a gun control DISASTER.

The bad news is, with everything Minnesota Gun Rights is facing in 2018, money is tight.

Without a MASSIVE influx of funds, I’m worried about our ability to stand up to everything the gun-grabbers are throwing at us!

That’s why I’m counting on your IMMEDIATE action and advice.

As you’ll see, I’ve included a special Minnesota Gun Rights Member Ballot link with this email. Won’t you please click and submit it right away?

As you know, gun-grabbers like BILLIONAIRE Michael Bloomberg and George Soros have been salivating over Minnesota for years.

Now, I’m more afraid than ever that they’re coming after us with everything they have.

The good news is, since Minnesota Gun Rights’ formation, we’ve held back EVERY ONE of the gun-grabbers’ assaults on our Second Amendment freedoms.

Even when gun control was considered a “done deal” in St. Paul, you and I stood up and stopped the madness.

But today, without your action, I’m worried it could be a different story.

With only a one-vote pro-Second Amendment majority in the State Senate, our anti-gun statewide media is convinced the Gun Control pressure they generate out of our two mega-cities will be enough to grease the skids for any radical scheme they can dream up, including:

Here’s why: it’s nothing more than anti-gun code for STATEWIDE GUN
REGISTRATION!

There’s no way such a scheme can be enforced without tracking every
gun and gun owner in the state! And as you and I both know,
registration is just the first step toward outright CONFISCATION.

>>>  A statewide AR-15 or so-called “Assault Weapons” ban. This draconian
legislation being pushed by Representatives Linda Slocum and Erin
Murphy is designed to outlaw any semi-automatic rifle, shotgun or
pistol with a detachable magazine and any other “scary” feature.

That could include something as simple as a thumbhole stock or
muzzle brake, which are common on many modern hunting rifles!

>>>  The Gag Act. This scheme is designed to muzzle organizations like
Minnesota Gun Rights during election years by forcing us to jump
through expensive bureaucratic hoops just to mention a candidate’s
name and record during an election year!

And that’s just to start.

With many GOP insiders and consultants advising State Representatives and Senators to hurry up and “compromise” on gun control to help them look “reasonable” to voters in 2018, the storm clouds are quickly darkening.

If either one of these gun-grabs start moving, it would be nothing short of a DISASTER.

So if you think standing up to the gun-grabbers’ gun control schemes is most important, please mark “DEFEND AGAINST ANTI-GUN ATTACKS” on your Membership Ballot.

But before you do, please consider that sometimes the best defense is a good offense.

Many Minnesota citizens understand that no gun control law is going to stop radicals who are hell-bent on committing the atrocities we saw in Florida.

After all, the Florida killer went into a federally mandated “Gun-Free Zone” and murdered 17 people.

Last time I checked, that was already illegal!

To stop these and other attacks, what we need is fewer so-called “gun free zones” (like the one the Florida killer exploited) and other regulations that prevent law-abiding citizens from being able to defend themselves.

Here in Minnesota, our lack of a Stand-Your-Ground Law is one of the main reasons Guns & Ammo Magazine says there are only 11 states in the country with worse gun laws than Minnesota.

If passed, Stand-Your-Ground would simply say law-abiding Second Amendment supporters can defend themselves against criminal attack without fear of being targeted by an anti-gun prosecutor or judge.

Without this critical law, anti-gun prosecutors routinely seek to nail gun owners to the wall for daring to defend themselves.

In a case like Florida, would we really want someone who could stop that attack to be second-guessing him or herself out of fear of their own government?

I think most Minnesotans would answer, “NO!”

If gun-grabbers want to stand up to stop Stand-Your-Ground, I believe they will pay the price at the ballot box in 2018.

So if you think staying on offense should be Minnesota Gun Rights’ top priority for 2018, please mark “PASS STAND-YOUR-GROUND!” on your Membership Ballot.

But before you do, please don’t forget that 2018 is an absolutely critical election year as well.

Gun-grabbers in Minnesota are desperate to DESTROY the momentum you and I have built for our gun rights, seize back control of the State House and get back to work turning Minnesota into an anti-gun utopia like California, Massachusetts and New York.

Virtually everyone — from anti-gun media elites to political “experts” — claim they have the momentum.

I’m committed to fighting back.

In fact, I’m preparing to run the biggest election year program in our history.

Over the past few years, Minnesota Gun Rights has become the most FEARED forces in Second Amendment politics.

That’s not because we play buddy-buddy with legislators and cozy up to them until they like us.

It’s because they HATE us.

It’s because every legislator knows that if they to betray us on guns, we’ll expose them.

And legislators know when election time rolls around, they will be held accountable for EVERY vote.

My goal is to go on the attack ahead of both the 2018 primaries and General Election to ensure that every anti-gun member of our State Legislature in BOTH parties is exposed.

I’ll use every tool at my disposal from mail and email, to social media, to hard-hitting radio, newspaper and even TV ads if I can raise the resources.

Such a program is going to be very expensive.

But it could not be more important — not with BILLIONAIRE gun-grabbers Michael Bloomberg and George Soros funneling what most experts agree will be in excess of a MILLION dollars into Minnesota to seize control of our State House.

So if you think holding the gun-grabbers accountable in 2018 should be my top priority, please mark “EXPOSE THE GUN-GRABBERS” on your Member Ballot.

I’m sure you can see why I’m so torn today — and why I can’t decide where I should seek to focus budget cuts should they become necessary.

The truth is, every option makes my stomach churn.

Perhaps you think stopping the gun-grabbers’ assaults is most important.

Perhaps you believe it’s worth the risk to hope that it takes care of itself and we should focus on Stand-Your-Ground.

Or perhaps you believe concentrating on the 2018 elections should be Minnesota Gun Rights’ top priority.

Whatever you decide, please mark your selection on your Membership Ballot.

And please agree to rush your most generous contribution to help cover the costs of these critical programs.

Of course, there is one more option.

It’s an option I’ve yet to mention because it will not — under any circumstances — be possible without a massive influx of resources.

Nevertheless, it is the option I hope and pray you’ll choose.

But if you pick this option, please realize I’m going to need your most generous support — as much or even more than what you’ve been able to do in the past.

I know that’s a tremendous amount to ask for.

But as we head into the 2018 election year, there’s just so much at stake.

Whatever you can give will make a difference.

But I need to hear from you IMMEDIATELY.

With the 2018 legislative session already underway — and anti-gun radicals flooding the capitol in opposition to your freedoms — I don’t have a moment to waste. 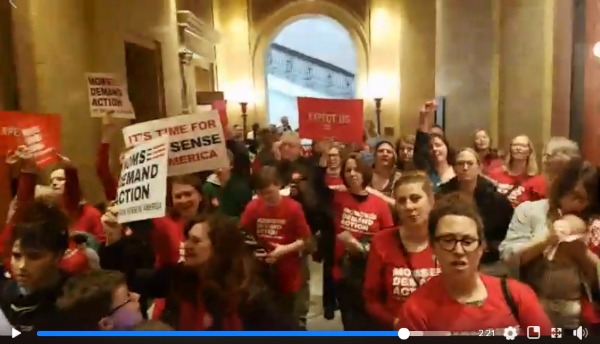 P.S. With the first week of the 2018 legislative session under our belts and Bloomberg’s anti-gun organizations on the warpath, I need your advice.

Without an IMMEDIATE influx of funds, I’m going to be forced to cut back.

So please fill out your 2018 Membership Ballot right away!

To stay up-to-the-minute on the fight for gun rights in Minnesota, please take a moment to go check it out on our
Facebook page by clicking the image below!

Bloomberg on the Warpath – I Need Your Advice