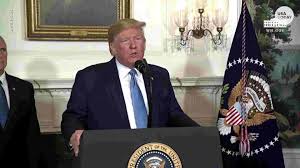 It was hard to watch.

In case you missed it, at a press conference earlier this morning, President Trump announced his full support for ‘Red Flag Gun Seizure’ legislation in the wake of the Texas and Ohio shootings that took place last weekend.

This is the very same legislation being pushed by the radical left and weak-kneed moderates in Washington D.C. and state legislatures all over the country — and especially right here in Minnesota!

And unless gun owners push back with everything they have, this bill will sail through Congress and be signed into law, forever weakening our right to keep and bear arms in America!

I’ll explain what a ‘Red Flag Gun Seizure’ is down below in case you’ve not heard about it, but whatever you do, please fire off the two PRE-WRITTEN EMAILS that I’ve prepared for you immediately!

These emails take just seconds to send, so please take action immediately and share these links with every gun owner you know!

Remember, a ‘Red Flag Gun Seizure’ law is much worse than a ban on the AR-15, magazines that hold over 10 rounds, or anything else.

That’s because a ‘Red Flag Gun Seizure’ would allow virtually anyone who doesn’t like you to be able to make up a bogus complaint –- allowing a liberal judge to order your firearms to be confiscated.

Before you’ve been charged.

Before you’ve been indicted.

And before you’ve been convicted…of anything!

And it would happen in secret, via ex-parte’ court hearings that you would know nothing about and would not be able to attend — obliterating your ‘due process’ rights!

This is already the law in liberal states like California, New York, and Maryland, and if we don’t fight back, Minnesota may soon join these ranks!

Senators Klobuchar and Smith need to hear from you today.

And if you’re not yet a member of Minnesota Gun Rights, we need you now, more than ever.

Stand with us and become a member today.

P.S. With President Trump now calling for passage of a ‘Red Flag Gun Seizure’ law in the wake of the Texas and Ohio shootings, gun owners need to take immediate action!

Please email President Trump — as well as Senators Klobuchar and Smith — and insist that they stop caving into the radical left, by opposing this legislation!

Not a member? Join HERE!
Already a member? Donate HERE!