My eyes scanned every which way I could as I gave the attendant at entrance 5 my ticket to get into the State Fair, but my eyes couldn’t spot it.

You see, Tuesday afternoon as I was driving through St. Paul I decided to check out the State Fair entrances to see whether or not the State Fair board was still in violation of Minnesota law (Stat. 624.714, subd 23) that prohibits them from banning lawful firearms from the fairgrounds.

And as a governmental unit, they’re prohibited from banning carry permit holders from the fair.

But they do it anyway! They hang up big ridiculous signs saying “Minnesota State Fair Bans Guns In These Premises.”

The answer, the fact that criminals break laws and rules anyway, is pretty obvious to most folks.

But not to the Fair Board! They only target folks like you and me – law-abiding, peaceful Americans fiercely partial to the right to defend one’s life.

The result? Last year a criminal ignored the ridiculous signs and used his firearm to violently hold up some brewery vendors, tying them up and gagging them and then robbing them of over $100,000!

So back to the signs, I went to an information booth to ask about the official firearms policy.

Although the attendant didn’t know the answer to my question, he did say “it would be ridiculous to stop good gun owners from carrying guns, because all the bad guys do it anyway” and then directed me to an office that would have better information.

That kicked off an hour of crisscrossing the fairgrounds trying to track down an official answer, being told everything from “no, we don’t have a firearms policy” to “law-abiding citizens are strictly forbidden from carrying firearms at the fair!”

But an hour later, I still hadn’t seen a sign prohibiting firearms, so I went and checked out an entrance on the south side of the fairgrounds, and sure enough, there one was. 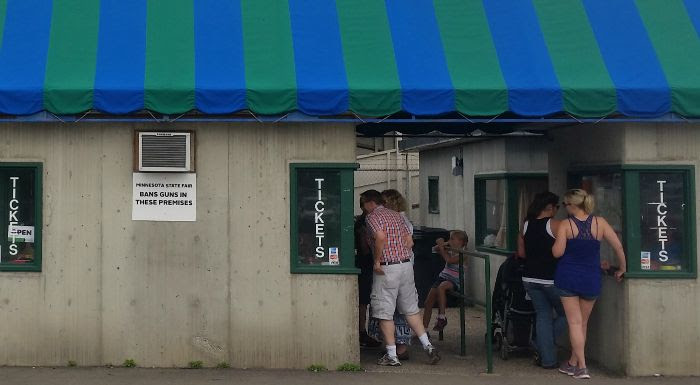 I asked the attendant who was letting me back in, “are you folks asking people if they have any firearms on them?” to which he replied, “what are you talking about?”

I mentioned the sign a few feet away from him and asked “are you asking people if they’re disarming themselves before they’re allowed in?”

He told me that the sign is up “more to tell bad guys not to bring their guns in” and that he “doesn’t really pay attention to that.”

Knowing what a joke these signs are, knowing that the only people who follow the sign rules are the type of citizen you WANT carrying a firearm and knowing that the signs only ATTRACT criminals and lowlife thugs, I’d had just about enough.

So I went to the Fair Board administration building to talk to someone in charge about the policy and ultimately why they ignore Minnesota law prohibiting them from prohibiting guns!

Insultingly, the secretary I asked the question to went into a back office, and her supervisor, a “Julie Samek,” wouldn’t even come out to talk with me.

Instead, “Samek” (who according to the clerk had the “authoritative word” on the subject) had her secretary inform me vigorously that there are absolutely no firearms allowed in the Fair Grounds. Simply incredible.It’s as if the Fair Board administration believes if they just repeat the lie enough it’ll become true! And that’s why I’d like your help, because the folks who run the Minnesota State Fair just aren’t getting the picture.

After several shootings in recent weeks where subhuman criminals targeted victims in known “gun-free zones” like the Charleston, SC church and the Chattanooga, TN military recruiting center, it’s clear that criminals are developing a taste for helpless victims.

(Even the news anchor shootings in Virginia last week graphically illustrated how killers abhor a victim that can defend themselves) And knowing that they’re in violation of the law by banning lawful citizens from being able to defend themselves, there’s no excuse for the Fair Board’s actions anymore.

In fact, if a tragedy were to occur on the Fairgrounds, it’s nearly impossible to imagine a scenario where the Fair Board doesn’t incur some of the liability and blame!

That’s why I’m asking you to take two minutes right now to call the Fair Board at (651) 288-4400. Demand that they stop trampling out the civil rights of law-abiding gun owners and TAKE THOSE SIGNS DOWN!

And if you can, please consider chipping in just $10 to help us continue mobilizing more and more gun owners across the state of Minnesota!