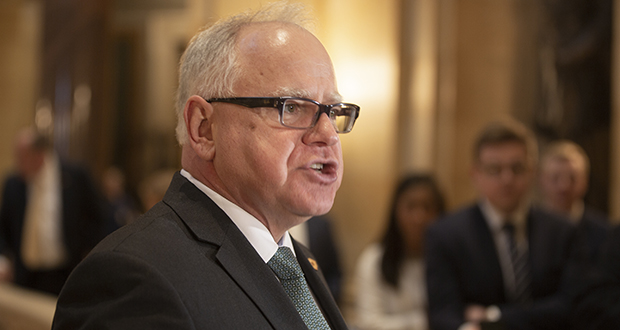 Yesterday I had BAD news to share about “Red Flag Gun Seizure” laws being pushed in Congress by everyone from Nancy Pelosi to Lindsey Graham to President Trump.

But today we have an absolute gun control emergency right here in Minnesota!

That’s because yesterday, anti-gun Governor Tim Walz put out the call, demanding a SPECIAL SESSION next week for the sole purpose of passing his radical gun control agenda.

This demand comes on the heels of the shootings that took place in El Paso, TX and Dayton, OH.

The radical left, totally ignoring the real reason violence like this happens in our country, are always happy to spit in the face of victims in order to advance an agenda that will not save lives, but will instead be used to annihilate our fundamental right to keep and bear arms.

In an interview yesterday, Walz said that he would only hold a special session if he and our weak Senate Majority Leader, Paul Gazelka, could come to a gun-control agreement beforehand.

Worse, our sources inside the capitol are telling us that Gazelka, feeling the heat from anti-gun activists and the media is already sitting own with Walz and looking to cut a gun control “deal”.

“Deals” only go one way and it’s a total ATTACK on our gun rights!

Let me be very clear:

If Paul Gazelka cuts a deal and agrees to a special session, we could have Universal Gun Registration on the books in a matter of DAYS!

If Paul Gazelka cuts a deal and agrees to a special session, we could have our due process rights flushed down the toilet as ‘Red Flag Gun Seizures’ become the law!

If Paul Gazelka cuts a deal and agrees to a special session, our Second Amendment rights as we know them could be totally gutted.

That’s why I need you to do 3 things, IMMEDIATELY!

First: Call, email and Facebook Message or Tweet Governor Walz and tell him HELL NO to a special session and to his gun control agenda!

Second: Do the exact same for Senator Gazelka. In fact, it’s more important that Senator Gazelka hear from you as it is he who needs to sign off on this gun control deal and special session. Contact him NOW!

Third: please sign your petition right away to help STOP THE WAR ON GUN OWNERS!

We’re staring down the barrel of a gun control disaster right now and we simply MUST take action to defend our freedoms or watch them get wiped away in an anti-gun avalanche!

So after you’ve taken action above, please consider an EMERGENCY contribution to help us pull the rug out from under this gun control push.

Between battling Paul Gazelka and Tim Walz and alerting gun owners to contact President Trump and our Minnesota congressional delegation, we’re pressed to the hilt at MGR and working around the clock.

But we can’t do it alone and the costs are adding up very quickly.

So please do what you can right NOW to help us stop this gun control push right here in St Paul and in Washington D.C.

Please read the email above and take action using the information provided to stop this gun control freight train!

When you’re done, please consider making an EMERGENCY contribution to help us stop this assault on our freedoms.

Not a member? Join HERE!
Already a member? Contribute HERE!