Today is a terrible day for the Second Amendment.

At midnight today, massive infringements on the right to keep and bear arms took effect in the Commonwealth of Virginia — a state that has been a bastion of freedom for hundreds of years.

And as you’ll see, these are not minor changes.

These are the kind of gun control laws that radical socialists dream about, the kind of laws that put otherwise law abiding gun owners in prison!

As of this morning, if you buy more than one handgun in a month, you could be headed to prison for a year, as Virginia has re-enacted their ‘One Gun a Month’ law.

As of this morning, if you give a gun to your adult grandson without first obtaining government permission, you could be headed to prison for a year, as Virginia has enacted ‘Universal Gun Registration.’

As of this morning, if you have children in your home and have a handgun near your bed for self-defense, you could be headed to prison for a year, thanks to Virginia’s new ‘Safe Storage’ laws.

As of this morning, cities across the Commonwealth can ban guns on all city property and at all city events, leaving you utterly defenseless against a madman who targets the venue knowing it’s a ‘Gun Free Zone.’

As of this morning, if a bitter ex-spouse or other personal enemy wants to make up a claim against you in a secret ex-parte court hearing, your guns could be seized before you have been charged or convicted of a crime, because Virginia is now a ‘Red Flag Gun Seizure’ state.

Take a good, hard look at this list. Because this is exactly what radical socialist lawmakers in St Paul are trying to pass into law here.

And with Michael Bloomberg directly targeting Minnesota now, they are gaining power every single day.

And sadly, this is only half of the gun control laws that took effect today in Virginia, as Bloomberg-backed radicals routed the Second Amendment earlier this year in Richmond.

In denial, some gun rights groups are hoping to find relief in the courts. But that’s a fool’s errand as everyone knows. In fact, multiple court appeals have already been rejected in Virginia over the last few months.

Others are blindly skipping along, happy that the politicians in Richmond didn’t pass a ban on AR-15’s or 30 round magazines. Some organizations in Virginia went so far as to claim victory in 2020, because this ONE bill was defeated. 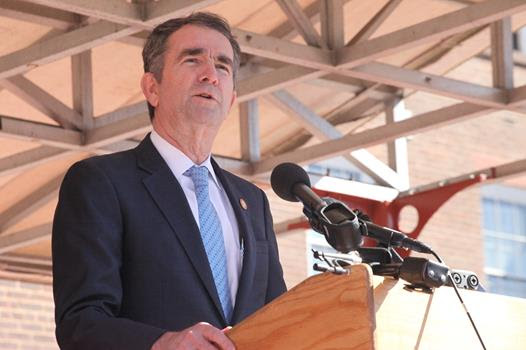 (Virginia Governor Ralph Northam signed a series of gun control bills into law this year that will put otherwise law-abiding gun owners into prison, and he’s not done yet.)

This, also, is nonsense.

The Virginia playbook is how the left always operates! They throw 15-20 gun control bills against the wall — allowing a few of them to be sacrificed on the alter of distraction — and then pass 90% of their overall agenda!

And while some gun owners are cheering the 10% of freedom they saved, radical socialists know that they passed 90% of their agenda and that they will be right back in the Capitol next session looking for the remaining 10%.

In fact, Governor Northam has already promised that passing an ‘assault weapons’ ban would be his top priority in 2021.

And now that they’ve destroyed much of the Second Amendment in Virginia, Michael Bloomberg’s organization is DIRECTLY TARGETING MINNESOTA and they are being very obvious about it.

“Everytown and Moms Demand Action will be deploying our grassroots power and substantial financial investments to deliver a gun sense majority legislature in… Minnesota — the same way we did in Virginia in 2019!”

The only way we are going to stop this socialist takeover and protect our precious right to keep and bear arms is if gun owners stand together and FIGHT BACK!

So if you’re not already a member of Minnesota Gun Rights, now is the time to get involved in this fight.

As you’ll see below, there are various membership options to consider, and each comes with different member benefits.

As Virginians are learning today, these radical socialists won’t stop until they have banned and confiscated every gun you own — or until you are in prison!

Fight back! Get involved with Minnesota Gun Rights today!

P.S. Virginians are waking up to an entirely new way of life today, as almost a dozen gun control laws took effect this morning — laws that will put gun owners into prison!

What’s worse, Bloomberg’s operation is openly saying that they are now moving on to Minnesota, looking to flip the weak Minnesota Senate and pass the same gun control they passed in Virginia!

This fight is raging, and we need every gun owner in Minnesota involved in this fight, so please select the membership level that is right for you today!