(This is the second part of our 2017 legislative wrap-up series. If you missed the first part, you can find it by scrolling to the bottom of this email.)

And then we turned to you, grassroots gun owners across the state, and asked you to contact your representatives in the House and urge them to co-sponsor HF 309.

HF 309 was rock solid, similar to many Constitutional Carry bills that have been passing all across the country in the last two years.

Thanks to your calls and emails, HF 309 quickly accrued over a dozen co-sponsors in the House and was picked up by statewide media.

And for the first time in history, we had Constitutional Carry introduced in both chambers of the Minnesota legislature!

But the anti-gunners quickly got to work.

Then, anti-gun activists from Michael Bloomberg’s Everytown for Gun Safety and Moms Demand Action were deployed to the legislature to pressure weak-kneed legislators.

And, of course, anti-gun legislators like Dave Pinto, Dan Schoen and Ron Latz joined in with their doomsday scenarios about what would happen if we passed Constitutional Carry. 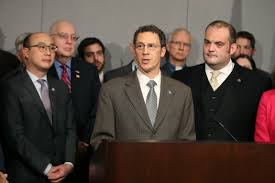 But while our surrounding states immediately began implementing the mandate they were given in the November elections, our own Minnesota House Leadership got weak.

We got word from our inside sources that Leadership gave the order to the Public Safety Committee to drag their feet and stall the hearings for HF309.

So we dug in hard, asking gun owners across Minnesota to call and email committee Chairman Tony Cornish, telling him to stand up for gun owners and hold a hearing for Constitutional Carry.

In early March, MGR staff followed up on the calls and emails and hand-delivered over 20,000 of your signed petitions in support for Constitutional Carry to House Public Safety committee members, making it crystal clear that gun owners want a hearing on Constitutional Carry NOW!

They received the message, and we were notified that a hearing had been scheduled.

And again we asked gun owners to contact members of the Public Safety Committee, and you did so by the thousands.

After being bombarded by thousands of gun owners across the state, legislative leadership was feeling the pressure to “do something”.

But at the same time, our friends in the legislature were telling us Leadership didn’t want to move any gun bills.

Worse, we were told that they wanted to maintain their friendships with the anti-gun and weak-kneed members of BOTH caucuses.

This was made clear when they began to stall the gun bills.

But they made sure to make it look otherwise.

When March 8th rolled around, they held hearings on both Constitutional Carry AND Stand-Your-Ground legislation. 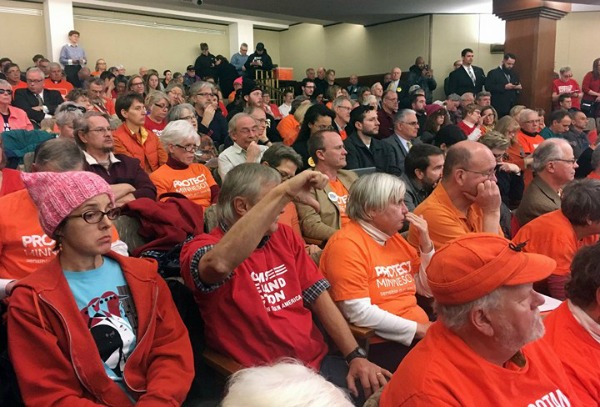 (MGR staff standing in the top right corner, surrounded by a sea of Bloomberg’s anti-gun shills at the Constitutional Carry and Stand-Your-Ground hearing on March 8th, 2017)

And normally that would be a good thing.

After all, since our founding in 2013, Stand-Your-Ground has been one of our primary legislative objectives.

But as the hearings played out and the votes were cast, gun owners were betrayed when they killed Constitutional Carry outright.

And to string gun-owners along, they laid Stand-Your-Ground over for “possible inclusion” to the Public Safety Omnibus bill.

In other words, at the orders of Speaker Kurt Daudt and Majority Leader Joyce Peppin, the “pro-gun” Public Safety committee killed the gun bills.

Or so they tried.

But we knew there were still options on the table – if we were willing to ruffle a few political feathers and do what was necessary to make it happen.

It just so happens that we ARE willing, seven days a week.

You see, MGR doesn’t exist to make friends with the politicians.

We exist to advocate on behalf of our members for the 2nd Amendment, defend it from attacks and advance it whenever and wherever possible.

In fact, they wish we would act like the other “gun rights organizations” who happily take orders from “Leadership” just to maintain access to the politicians – at the expense of their members’ 2nd Amendment rights.

So MGR sprang right into action.

We knew they weren’t going to actually follow through and put Stand-Your-Ground onto the Public Safety Omnibus bill.

It was no surprise days later when they didn’t.

Instead, we sounded the alarm to you folks and gun owners poured on the pressure, forcing leadership to send Stand-Your-Ground to the House Rules committee.

And that brought us one step closer, and the fight for gun rights in the 2017 session of the Legislature switched from Constitutional Carry to Stand-Your-Ground.

In our next session-in-review email, we’ll take you through the House Rules committee fight and the betrayal of House leadership in the final hours of the 2017 session.

(If you’re not already a member of Minnesota Gun Rights, feel free to join now!)

P.S. This is the second in our year-in-review email series, giving you a peek behind the curtain in our fight for Constitutional Carry and Stand-Your-Ground law in Minnesota this year.

Stay tuned for the third and final part in our series, coming out shortly.

And if you’re not yet a member of Minnesota Gun Rights, get involved today by clicking this link now!